The acoustic scanner, also known as the acoustic televiewer, uses high frequency sound wave echoes together with magnetometers and accelerometers to provide an orientated travel time and amplitude image of the borehole wall.

Two images are produced which are presented as “unwrapped” images (imagine pealing a layer of skin from the borehole wall and laying it on a flat surface): 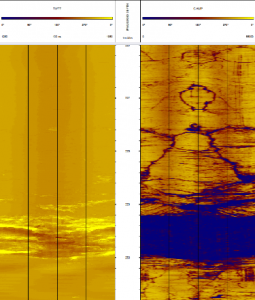 How the image data is sampled? 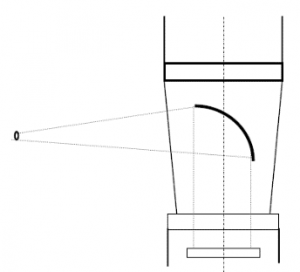 The 360 degree image coverage of the borehole wall is obtained through a rotating, angled mirror below an acoustic transducer which through clever timing synchronisation acts as a transmitter and receiver of the ultrasonic echoes. Another feature of the probe which increases the vertical resolution of the image data is focusing of the acoustic echoes through a curved and angled mirror.

Orientation of the image data

Orientation of the image (by orientation we mean a Magnetic North reference or a reference to the high side of the borehole) is achieved using a three axis magnetometer and a three axis accelerometer inside the probe.

The following conditions in the borehole are required

– An ultrasonic signal cannot be sustained in air.
– The fluid can be water (of any salinity) or drilling mud.
– Heavy drilling muds can affect the signal quality.

– Achieved by using two spring centrallisers located towards the top and bottom of the probe.
– Allows the acoustic echoes to be reflected perpendicular to the borehole wall.

Once the image data has been acquired, the power of the borehole imaging technique is that structures which cut across the borehole can be identified and have the dip angle and dip direction individually measured.

Remember the “unwrapped image”? In this format, any dipping structure forms a sine curve from which the structure’s dip angle and dip direction (initially with respect to the dip and dip direction of the borehole) can be calculated.

Whilst the technique could be likened to structure orientation from drill core, the acoustic scanner data is more diverse, more accurate and much more time effective.

Once the image data has been acquired, the power of the borehole imaging technique is that structures which cut across the borehole can be identified and have the dip angle and dip direction individually measured.