Gamma logging for uranium exploration and mining is an established technique for producing a rapid and cost effective depth based profile in a borehole of uranium ore grade.

The most common gamma logging technique is “total gamma” logging where the whole gamma radiation energy spectrum is measured. The size of the crystal used in the scintillation system of a total gamma probe can vary depending upon the requirement for sensitivity versus potential saturation of the scintillation system, Crystal sizes approaching 25mm diameter and 50mm length are common.
As gamma logging evolved, hybrid gamma probes were developed and made available to investigate specific areas of gamma radiation and/or to redefine the measurement range:

Calibration
The calibration process requires a borehole environment with a range of accurately known grades of Uranium surrounding the borehole. The uranium bearing zone needs to be a minimum thickness and a minimum diameter to allow an infinitesimal response – meaning the probe (instrument) sees only the uranium grade and nothing else.

In addition to environmental correction of depth based gamma uranium grade data, some data processing techniques have been developed, the chief of which is the deconvolution of the gamma log. The ideal response of a gamma log is shown below 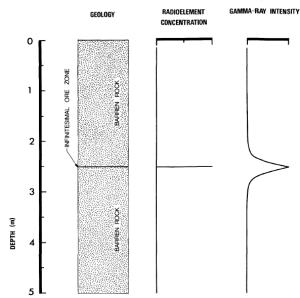 For a thin uranium bearing zone in a rock sequence otherwise barren, the plot of Uranium concentration becomes a broader based peak due to how we make the measurement and where we take the measurement. These effects can be summarised as:

Uranium disequilibrium is a concern for some uranium explorers where the uranium system is within a sedimentary environment with geologically recent groundwater circulation. Under such conditions, gamma logging results can be affected by the movement of uranium with respect to its daughter products. These concern relates to gamma logging responding to the uranium daughter products and not the uranium itself and hence the potential for false positives or false negatives.