The rock in a uranium bearing sequence acts in the same way, acting as a filter to broaden the gamma response. Deconvolution of gamma logs aims to strip off the geological effect and realise the in situ distribution of the uranium ores.

Additional to these effects are the probe housings and detector size and electronics, all combining to potential reduce the accuracy of the gamma logs.

At present, deconvolution of gamma logs is considered as specialised processing hence its use has been limited. Furthermore whether the process is actually necessary is sometimes questioned by Uranium geologists.

Gamma logs are a fundamental part of cost effective uranium exploration. Ideally we would like gamma logs to give exact information on the quantity and distribution of uranium ore with depth along the borehole. In the ideal world, the gamma log intensity would be exactly proportional to the uranium grade and any given depth. However, there are many factors which interfere with the ideal log and distort the shape of the gamma response. 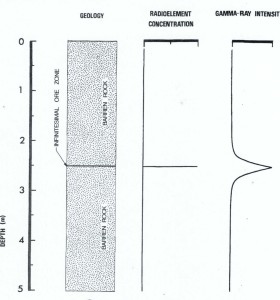 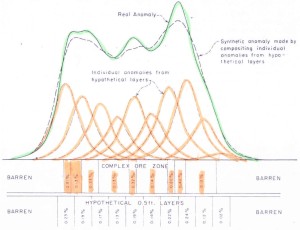