The acoustic scanner is an ultrasonic borehole imaging probe which is commonly run in combination with an optical scanner for detailed, high resolution images of the borehole through 360°. Ideal and commonly used for structural studies and geotechnical investigations but has applications in casing inspection and insitu stress analysis.

The acoustic scanner is a borehole imaging probe which is capable of high resolution ultrasonic images of travel time and amplitude thus creating an image of the full 360 degree borehole wall. A single transducer in the acoustic head acts as both a transmitter and receiver of the ultrasonic pulses using sequential timing of the rotating mirror. It is the rotating mirror above the transducer with focuses the acoustic beam and provides 360° coverage of the borehole wall in the direction of logging creating a helical spiral of data.

Travel time of the ultrasonic signal from the probe to the wall and back, acting as a high resolution caliper.

Amplitude of the ultrasonic signal, or signal strength, relating to rock hardness.

The acoustic scanner requires a fluid in the borehole to allow transmission of the ultrasonic signal, together with a central position in the borehole to allow the ultrasonic signal to be perpendicular to the borehole wall. The technique works best in boreholes with a smooth wall, namely cored boreholes, where the acoustic signal is perpendicular to the borehole leading to little dispersion of the return signal. However much of the value of the technique is the ability to generate good images from non-cored boreholes. 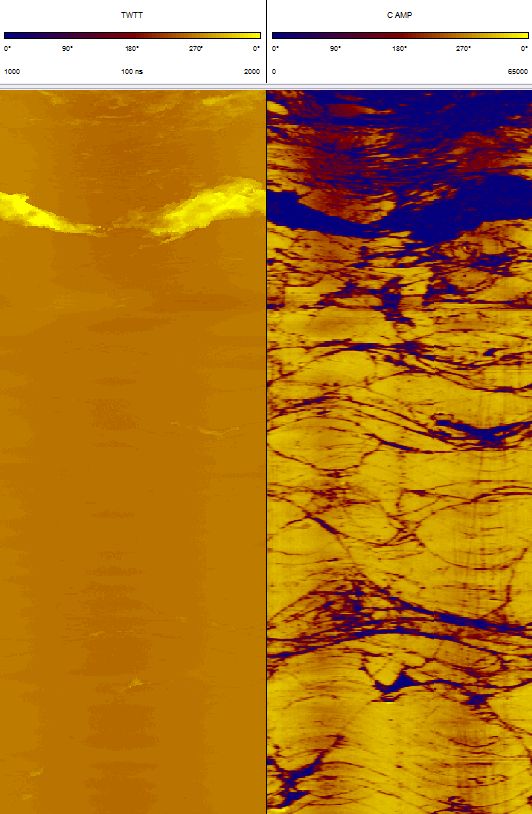