The fullwave sonic probe measures sonic waves (via pressure pulses) between a transmitter and a series of receivers – all at fixed distances in the probe. Velocity or transit time of the sound wave is a very useful parameter for engineering parameters such as rock strength, rock hardness, rock elastic properties and calibrating seismic surveys.

A standard configuration used in today’s coal industry uses a single transmitter and 4 receivers spaced 60cm, 80cm, 100cm and 120cm away from the receivers.

In the photograph below, the fullwave sonic probe is shown hanging vertically with the single transmitter at the base of the probe. Upwards, there is a low velocity compounded section to prevent direct arrivals, followed by the 4 receivers spaced every 20cm. The ray paths of the sound wave pressure pulses are shown in green between the transmitters and receivers 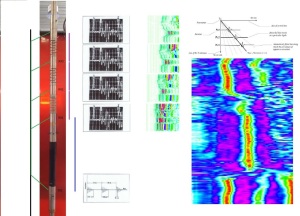 Next to each receiver (in black/white) is a sample of a short recording of the sound wave at each receiver. The millisecond recording allows the compressional, shear and tube wave arrivals to be identified.

Further to the right is a sample output of the fullwave sound wave output at each receiver and over a distance of 20m. This illustrates what the logger can see during data acquisition.

Logging requires a fluid in the borehole to propagate the pressure pulse between the transmitters and receivers and allow the measurements to be made.

The most common method of processing fullwave sonic data is called “semblance processing” using softwares such as Wellcad. Essentially semblance processing is a form of signal processing where “in phase” amplitudes when added together increase the signal but “out of phase” amplitudes when added together cancel each other out. The result is a significant decrease in the signal to noise ratio resulting in the compressional, shear and tube wave arrivals to be clearly identified and “picked” to generate a curve. 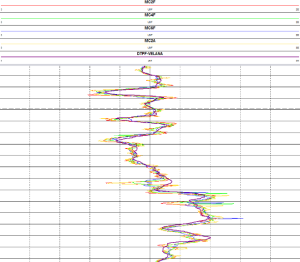 The typical products of a fullwave sonic include digital arrival curves for the compressional, shear and tube wave arrivals. From the compressional and shear wave arrivals, Poisson’s Ratio can be calculated. If density data is available the range of calculable rock elastic properties increase to Young’s modulus, shear modulus, bulk modulus etc.

The sonic transit time only probes are older versions and only record the compressional wave arrival time. No fullwave data is recorded. Multichannel curves are commonly generated from this probe (and also generated by the fullwave sonic) representing a range of receiver pairs and their respective distances – covering 20cm, 40cm and 60cm. 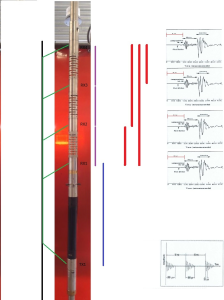 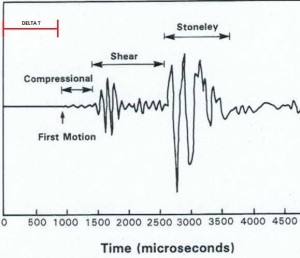